First Bank of Nova Scotia, 1832, Corner of Duke and Granville

The Bank of Nova Scotia was founded in 1832 to compete directly with the Merchants bank of Halifax. Its first branch was located in John Romans’s building at the Corner of Duke and Granville Streets.

By 1836, the bank had outgrown the location, and Purchased the lot at 188-190 Hollis St. They built their second branch there,Moving in in 1838. The bank  remained at that location until they built the new 1930 headquarters at the Corner of Hollis and Prince Streets.

The Bank of Nova Scotia headquarters,  was built in 1929 and designed by John M. Lyle. Lyle was trained in the Beau Arts Style in Paris, But wanted to build in a uniquely Canadian way. The building is best described as Canadian Deco, and is similar to Scotia Bank offices he also designed in Ottawa, Toronto and Calgary. The Branches show a progression from the Neo-classical to a more modern form.

The Ottawa Branch was built in 1924. It features a rusticated base, and full Doric columns leading to an entableture. By the time Calgary is built, the doric Columns have been flattened to a pilaster, though the formal composition is still very much the same. 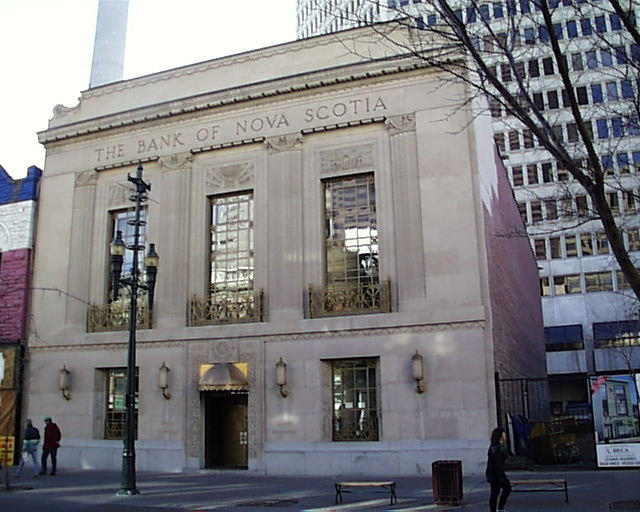 The Style has again been reduced to its most simple by the time the Halifax Headquarters is built.

Borrowing from the Chicago style, the banking hall is rusticated, providing a stable base.the Pilasters extend through the office floors above, giving an emphasis on the vertical, and finally topping out with a cornice. Hallmarks of the Canadian Deco style include Canadian floral and fauna motifs. the beau Arts syling can best bee seen in the symmetry of the building.

(Above) A depiction of the first steamship to Cross the Atlantic.
(Below) The Doors to Bank Vault. It features Squirls with nuts (hide for safe keeping), beavers (presumably symbolizing Canada, and hard work and industriousness) Wheat Chaffs For Prosperity.

(Below) Above the main door from the Lobby is this depiction that appears to be a Pontus – the Greek God of the Sea. He Has a fishing lure in his mouth.

Additional Floral and Fauna Motifs from the Exterior:

A Brief History of Emergency Shelters in Halifax Parks.
Some commentary on the current housing crisis in Halifax, and what we did about it the two previous times this happened.